The Society Of John De Graeme

Sir John De Graeme, baith wight and wise,
Ane of the Chief who saved Scotland thryse
Ane Better Knight no to the world has lent
nor was gude Graeme of Truth and Hardiment
Button Text

Sir John de Graeme was born during the early 13th century. Tradition holds that he was born in a Motte and Bailey castle below Fintry hills. These castles were made by digging a ditch around a mound (motte) built up with the soil from the ditch. On the flattened top of the motte a high palisade made of logs was built for defense. Adjacent to the motte, there was a living area of several acres, which was called the bailey, it was surrounded by another palisade and ditch. Graeme’s castle, at the head of the Carron valley, was unique because it had a square ditch. These castles were used by the Normans for protection and to control the indigenous population.Sir John’s father is believed to be the grandson of William de Graeme. Sir John was legendary for his bravery, and was known as “Graeme with the Bright Sword.”

Sir William Wallace met Sir John, late in 1296, after escaping his English pursuers by swimming the icy River Forth. He spent three nights with the Graeme's of Dundaff before going to Gilbank, near Lanark, for Christmas. Early in 1297, Sir John Graeme, with 30 men, met Wallace at Queensferry as he was being pursued by the English. Together, they suddenly turned and charged their pursuers. Many of the English scattered, leaving their leader with a small group of men. Sir John and his men promptly attacked and annihilated all of them.

May 1297, they avoided an ambush at Lanark with Wallace and Graeme  fighting off the English, in a narrow Street, leaving 50 dead and escaping through the home of Wallace’s wife, Marion. The sheriff murdered Marion and burned her house. The next night Wallace returned and avenged Marion’s death by killing the sheriff and his son, while Sir John Graeme led an attack on the English garrison, killing the commander and all of his men.

At Scone, Sir John helped Wallace avenge the killing of his uncle, Sir Ronald Crawford, by attacking a English court which was in session.
Sir John Graeme was a member of the army, led by Sir William Wallace and Sir Andrew Moray, at the Battle of Stirling Bridge, on September 11, 1297. The Scots lured the English army onto a narrow wooden bridge, across the River Forth, then firing the bridge and attacking those who had already crossed. The English were defeated and driven out of Scotland but Sir Andrew Moray died of wounds he received during the Battle of Stirling Bridge.

At Falkirk, July 22, 1298, Sir John Graeme died while fighting at Wallace’s side. His armor had not been properly secured at his waist and a English knight found the fatal area with his sword. William Wallace carried Sir John’s body to the Parish Kirk in Falkirk, where he was buried.

History records him as the “Right Hand of Wallace.” The inscription on his grave reads:
“Her lyse Sir John the Graham, baith wight and wise,
Ane of the Chief who saved Scotland thryse,
Ane better knight no to the world was lent
Nor was gude Graeme of truth and hardiment.”

Displayed on Sir John De Graeme's shield is three Scallop shells over some time people have asked are these his real arms and if so what do they mean .... 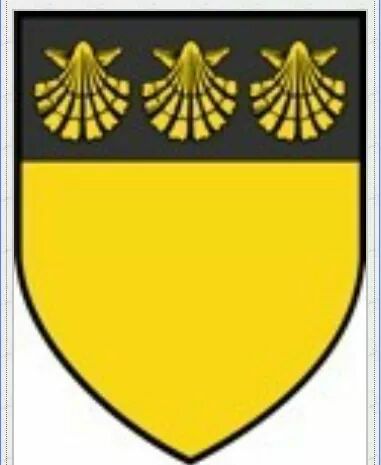